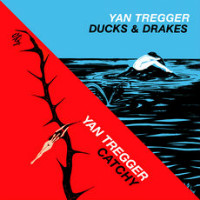 Back in the late 70s when disco and hip-hop were fighting over who was going to truly inherit funk and soul’s mantle it looked for a time as if disco was way out in front. Of course we all know that a few years later, disco was all but played out while hip-hop (in time-honoured fashion) had just been taking its time getting started – not to mention craftily purloining disco beats to further its own status. And once it did get started, for a while it seemed nothing was safe from sampling. Which makes it surprising that late 70s experimental French disco don Yan Tregger is, even now, relatively under-sampled because, in 1978 and 1979, just as hip-hop was on the cusp of global awareness, he dropped two superb instrumental disco LPs, Catchy and Ducks And Drakes. Originally released on French library music label Musical Touch Sound, both LPs were composed, performed and produced by Tregger more or less solo and on both of them damn near every track is a sample-fiend’s dream. Not for nothing are these two disco crate digger ‘holy grails.’

Part of their charm has to lie in Tregger’s avoidance of a lazy four-to-the-floor approach beatwise (though that sort business can be found on both LPs – more so on the earlier ‘cosmic disco’ vibes of Catchy, if you want it, for which check the title track), because our man was all about keeping it varied and funky. As a result, both of these albums, especially Ducks And Drakes contain percussion more heavily syncopated, layered and diverse in style than people normally associate with the devil’s dance music. Cases in point include the (by turns) stop-starty, skippy, rolling funk of The Girl In Gold and The Ivy Heart, along with the afro-latin layers of Dawn & Darkness on Ducks & Drakes and Sunny Wing on Catchy. Don’t expect it all to be pumping and up tempo either. Catchy also offers the slow-burning funk rock of Slow Zoom while Drakes & Ducks closes with the off-kilter bluesy, cinematic psychedelia of The Way Of All Flesh. Both albums then – well worth your time.
(Out 5 October on BBE)

Posted on 3rd October 2018 no comments