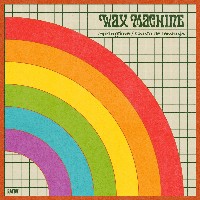 It might, technically, be a very early summer release but Springtime is funky as well as folksy-psychedelic on Wax Machine’s new double A-side single ahead of the release of their self-produced Hermit’s Grove LP. I say ‘double A-side’, but it doesn’t look like this one’s taking physical form as a single so the other ‘side’ is basically a simultaneous digital release covering Vinicius De Moraes and Baden Powell’s Canto De Iemnaja. How to represent the first of these two cuts in audio-visual format though? Well, given the hippy-dippy nature of proceedings, any singer sporting long hair and a loud shirt needs to be centre-stage (I say ‘stage’, this all takes place in a spring field, obviously) surrounded by two prancing feminine forms whose head-gear puts them somewhere between Farah Fawcett and the Stranger Things demogorgon. Just when you’ve got your mind around that, up pops the sun (I say ‘sun’, it’s someone in spiky yellow headgear) and things all start to go a bit Tellytubbies/ Night Garden. Who says drugs don’t yield great art?
(Out now on Batov Records)