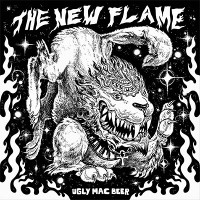 More sterling work from French producer Ugly Mac Beer with second single The New Flame off his forthcoming long-player The Valley Of The Kings due in January. If you caught the post about the first single and album title track just over a month ago, you’ll be aware that this is a concept album on which our ‘Mac creates his own classic Egyptian ‘sword and sandal’ movie epic via the medium of sample-rich instrumental hip-hop. The PR has it that the sonic vibe for this one is forged from such influences as RZA’s Ghost Dog OST, Cypress Hill’s Temple Of Boom and Serge Gainsbourg’s super funky 1968 gangster flick hit Requiem Pour Un Con. Cue a video of a large pointy-eared canine wandering the deserted streets of a city. The avatar of jackal-headed god Anubis prowling Luxor four thousand years ago perhaps? Not exactly – rather an alsatian-type dog padding around somewhere more modern and French. Still – maybe it’s symbolic – an Ozymandias-type linking of past and present? You know, the pharaohs might be two thousand years gone but a decadent elite still lay waste to what’s around them? Not that you care because that beat knocks hard!
(Pre-order the LP now on X-Ray Production)