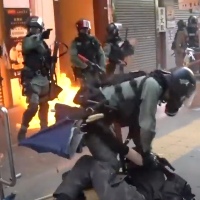 The Scribes continue to promote their Totem Trilogy EP Pt 1 collab. with Astro Snare by releasing this video (produced entirely during isolation by Wild Child Studios (Instagram @wild_child_studios)) for reggae-influenced EP track Mighty Mighty. Since the track in question lyrically forms a broad call to rise up against corrupt power everywhere, what better topic for the supporting video than the ongoing Hong Kong freedom protests? Said video features footage of police (and alleged triad) brutality against protestors juxtaposed with footage of a mainland Chinese military parade. While the brutality of the former is visceral and alarming as you’d expect, it isn’t so much the hardware and manpower on display in the latter that grabs the attention. This is rather more occupied both by the Chinese military’s surprisingly camp line in parade moves and Xi Jinping’s open-top vehicle approach to taking in the sites of a parade – which you’d think he might have swerved given the whole JFK thing, but there we go.

Don’t forget also that The Scribes have supplied a special code for MB readers that gets you 5% off their EP if you buy it from their bandcamp site where you need to enter monkeyboxing5 or cdmonkeyboxing5 for 5% off the digital or cd versions respectively. Bandcamp link below.