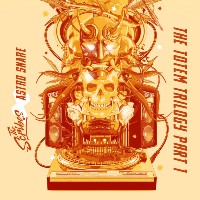 The Scribes don’t do things by halves and just to prove that, they’re back with a new release, in three EP installments – the first of which is Totem Trilogy Part 1 – produced by Chicago-raised Astro Snare and featuring UK hardcore rap pioneer MC Duke. Oh yeah and the cover art is by illustrator Chris Malbon (a man whose client list includes Nike and Lucasfilm) which, when put with the covers of the other two parts, will form an image of the totem of the title. This part of the EP is consists of five tracks kicking off with lively synth-powered posse cut I’m Back featuring Astro Snare doing a turn on the mic as well as MC Duke. Brag raps Rock This Part 2 and growly, bleeping closer Keep Bouncing stay in the same ballpark stylistically while Mighty Mighty veers into a mellower by bassier reggae hip-hop groove and Heart Breaks provides a piano-led, boom-bap accompaniment to break-up lyrics. Does not doing things by halves end there? No it doesn’t, they’ve supplied a special code for MB readers that gets you 5% off the release if you buy it from their bandcamp where you need to enter monkeyboxing5 or cdmonkeyboxing5 for 5% off the digital or cd versions respectively. Bandcamp link below.
(Out 13 April HERE)