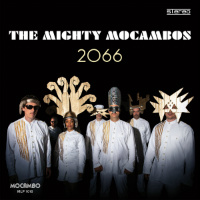 Not content with bashing out two super-dope, steel-drum funk albums (The Serpent’s Mouth and 55) since 2016 under their Bacao Rhythm & Steel Band alter-ego, The Mighty Mocambos have decided 2019 is the year to unleash yet another LP, entitled 2066, under their original moniker. Which is going some, I think you’ll agree. But have this German crew spread themselves too thin, or can they make it a glorious hat-trick? Let’s cut to the chase:

1. PREACHING TO THE CHOIR
Hot damn! It’s a glorious horns-drenched b-boy groove with retro synth stylings – this sort of thing can only increase the size of the Mocambo congregation.

3. SUPERSTRADA
…followed by this sitar-toting nugget which combines both the b-boy and cinematic elements…

4. CONCRETE STARDUST
…which itself is followed by another experiment in combining traditional b-boy funk with retro-synth elements – a blend that’s working out just fine, incidentally.

5. WHERE DO WE GO FROM HERE (with Lee Fields)
Time for a slowie with the last man standing from soul’s golden era – Mr Lee Fields and blow me down if it doesn’t sound just like a Lee Fields song. Well, it would, wouldn’t it?

6. MACUMBA
A throwback-groove reminding us that library music dons of yore were as liable to soundtrack a West Indies cricket test match as a gritty crime thriller. This is so much doper, than that sounds though. Again with the retro synth action too…

8. 2066 RETURN TO SPACE (with Peter Thomas)
Talking of returning, Peter Thomas guests on this collab. commemorating the first release of his 1966 score for sci-fi show Space Patrol.

9. GOLDEN SHADOW
Steady on – there’s websites for that! Oops – misread the title – nope it’s a hectic car chase theme. Throw in a bit of retro-synth? Why not?

10. TODAY
Perhaps a secular gospel slowie (if that’s not an oxymoron) now we’re getting to the end? Work those pipes Ms Richards, the people need a message of hope!

11. HERE WE GO (with Mocambo Kidz)
…then a return to chunky funk with kids on vocal duties doing the la-lahs and other chants. Happily, this is more Say It loud… than Sesame Street.

12. BOUNCE THAT ASS (with Ice T and Charlie Funk)
…and finally, the band provide rolling boom-bap so two men old enough to know better can exhort women young enough to be their daughters to shake booty. Controversial in this day and age and we all know how that one’ll go down live or in a DJ-set with the ladies. That’s right, they’ll be dancing to it.

COMMENTS: Well, the title of the LP might invoke the future and there are certainly electronic elements woven throughout more than a few tracks but this is a funk-soul LP in the classic mould. Opener and first single Preaching To The Choir has grown exponentially on the monkey since posting about it but that’s far from the only slice of goodness in yet another evenly paced and rock-solid set from this apparently tireless outfit.