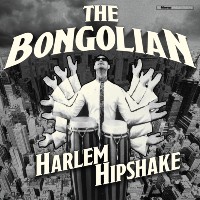 Looks like everyone’s been saving up all their album-length dope for the end of the year because here’s another spectacular long-playing autumn release in the shape of new Bongolian LP – Harlem Hipshake. This thirteen-tracker is the follow-up to 2016’s Moog Maximus and if that was all about exploring the potential of the Moog in all its glory, this one takes its cues from the sound of the late 60s/ early 70s Latin soul labels like Fania, centred in Spanish Harlem. It’s a sound that multi-instrumentalist Nasser Bouzida, ‘Bongolian’ Bouzida is perfect for. And it’s an absolute beast.

Opener, Give The Drummer Some, finds Bouzida very much – well – giving things some, building from initial multiple percussive layers into a groove that is subsequently joined by bass, live crowd samples, then, round about two thirds of the way through when it already feels like things are at their peak, a Hammond as well – which is when things get really funky.  The title track begins with just the faintest shades of Pete Rodriguez’s I Like It Like That or Ralph Robles’ Taking Over about it but soon becomes an altogether more epic and sweeping Mongo Santamaria-ish type affair with heavy heavy, funk drums.  Also with more than a little Mongo about is chugging wah-wah n horns-powered first single Flatfoot Hustle though solid as that is, there are better cuts on here.  Tito’s Pay Off – which nods to the Latin boogaloo grandmaster is one case in point though the absolute high point in an LP of them has to be album centrepiece, Soul Drums On 110th Street, which has everything in spades. With a fat but sinuous bassline, funky drum break, lashings of percussive layers, rhythmic Latin piano, sax, big horns and organ, here is a cut that deserves a future 45 single release, if anything does.  By far the monkey’s favourite Bongolian album to date this will also appeal to lovers of the second LP, Winner, from Bouzida’s ‘other’ band Big Boss Man, along with pretty much anyone who’s ever dug that ‘ol Latin soul groove.
(Out now on Blow Up Records)

Posted on 16th November 2020 no comments