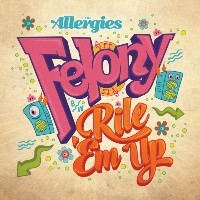 New Allergies LP Say The Word drops later this year but it would be tantamount to a felony for them to leave you till then without any new material. Which is why they’re all set to rile you up with a new vinyl 45 out today entitled – er – Felony and backed with the Andy Cooper and Marietta Smith-featuring Rile ‘Em Up. The former is the result of the boys having co-opted another slice of old soul which they’ve chopped up and re-made into a criminally good slice of pumping dancefloor heat while the latter is no less crowd-pleasing, nor any less dancefloor-oriented. In fact, it’s the monkey’s preferred cut, consisting as it does of party-starting hip-hop – as you’ll no doubt have guessed from the presence of ‘unofficial third Allergies member’ emcee AC who, with Ms Smith singing the hook holds forth over a piano-led boom-bap beat.
(Out now on Jalapeno Records)