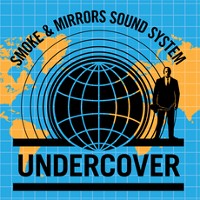 If you were musically alert last autumn you may have caught news of Smoke & Mirrors’ Badasonic Records EP Second That Emotion, a trio of cuts, two of which were inspired reggae covers of classics that got (and still get) regular rotation at MB Towers. Now billed as the Smoke & Mirrors Soundsystem, the outfit is back with a ten track, all covers (including the two from the EP), full-length affair, entitled Undercover.

A fairly high opening bar is set by a well-executed funky reggae version of Edwin Starr’s soul anthem 25 Miles, followed by a straight rootsy take on Junior Byles’ Fade Away and then another funky reggae cover – this time of Spencer Davis Group’s I’m A Man. Bowie’s Let’s Dance is arguably one of the more surprising choices to get versioned inna reggae stylee on the LP but SMSS pull it off pretty successfully all things considered, though it is bettered by an inspired female vocal-led lovers’ rock spin on Echo & The Bunnymen’s The Killing Moon. These two are joined by one of the covers from last year’s EP to form something of an early 80s-themed centrepiece trio, with this final one of the three, a cover of Tears For Fears’ Mad World, still the best. Then it’s back to the roots with an interpretation of Peter Tosh’s Mystic Man which like the Byles one, is highly competent but stylistically very close to the original whereas the best covers on this album confirm the rule of the best covers anywhere i.e. they take the original in a surprising new direction.   Second That Emotion which re-imagines the Smokey Robinson classic as someone like Hollie Cook might do it is just such a track.  All of that just leaves two further covers – a suitably slo-mo one of Sam & Dave’s When Something Is Wrong With My Baby and Tom Petty cover You Got Lucky which settles into a smouldering Sly & Robbie-esque groove after a ska-style intro.    Undercover it may be titled but this one should certainly raise the band’s profile.
(Out now on Escape Hatch Records)