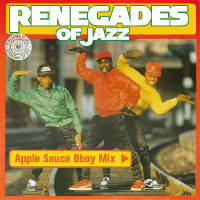 “Want apple sauce on that mate?” The answer’s yes, of course, when ‘that’ is your decks and the apple sauce is Renegades Of Jazz‘s B-Boy mix of his very own album track Apple Sauce. Imagine some latin hip-hop heads have got hold of the spy-funk original and supercharged the percussion with some Nu-Yorican Bronx flavour and you’ll have a rough idea of where this is coming from. Once again ROJ proves that modern jazz-influenced music doesn’t have to be the preserve of pseuds in ponytails, waistcoats and fucking trilby hats convinced they’re the best thing since John McLaughlin on guitar but actually sounding like the very shittest kind of jazz-funk wank. Obviously to give this the airing it deserves, you’ll have to be using Serato (or worse just a laptop) since this is a free digital download not an actual record. But we live in hope.