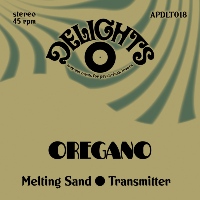 If you dig psych-soul, it’s most definitely your week since the second of two forthcoming Delights Records releases announced by Markey Funk (following the Les Hippies re-release) is this piece of 7″ glory from Oregano:  Melting Sands b/w Transmitter. Oregano? Ah yes – a new collab. between our Markey and, wait for it, Shawn Lee, Eleven 76’s Paul Elliott and RPS Surfers’ Shay Landa.  It was when The Library Music Film was premiering in Tel Aviv a while back that these four heads met, jammed and laid down the basis of what, after a year or so’s marinating, pretty much conquers when it comes to 60s sci-fi/ library funk. Exhibit A is the swirling slo-mo Melting Sand, on which Eastern sounds and melodies mingle with retro synths to evoke the lava-lamp skies of Pellucidar, Barsoom, or Lythion.  Then when that fades to a close, you stop the phonograph, reverse this glorious platter and strut like the Black Queen to the flute-led, dancefloor groove of Transmitter.
(Pre-order now on Delights Records/ Shipping 29 October approx.)

Posted on 6th October 2021 no comments