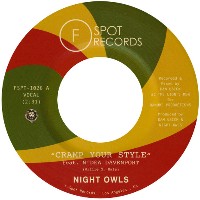 If you’ve heard anything previously by Night Owls, you won’t need any words to convince you to cop the new 45 the instant you see that they’ve covered All The People’s massive funk hit Cramp Your Style. Firstly, you’ll know that this L.A. supergroup have made their name reviving the old early reggae trick of re-imagining funk and soul standards as funky reggay cuts. Secondly you’ll know that the band consists of members of The Lions and The Aggrolites. And then there’s the fact that thirdly, they always get in world-class guest vocalists – in this case Brand New Heavies’ N’Dea Davenport along with Trish Toledo. So the monkey doesn’t need to say anything about this one but that’s no reason not to shout from the rooftops that it’s a total banger. Both sides too, given that the flip finds Toledo doing her best Mary Wells on a reggae reflip of Motown classic Your Old Standby. If you thought Night Owls couldn’t possibly top their previous 45s as compiled on recent LP Versions – think again!
(Out 16 December on F-Spot Records)

Posted on 19th November 2022 no comments