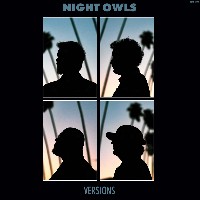 Now then, if you’ve been keeping your ear to the ground regarding all things funky reggae in the last year or two, you can’t fail to have happened across L.A. supergroup Night Owls, consisting of musicians from L.A. reggae outfit The Lions and Roger Rivas of the same city’s Aggrolites along with a revolving cast of singers including – deep breath – The Lions’ very own Malik “The Freq” Moore, The Aggrolites’ very own Jesse Wagner,  Breakestra’s Afrodyete, Orgone’s Terin Ector, The Indications’ Durand Jones, Jungle Fire’s Jamie Allensworth, and Fishbone’s Chris Dowd and John Bigham.  It’s an impressive line-up and has thus far borne fruit in eight pretty much sold out everywhere 45 releases that have very much lived up to the group’s promise and which are all now compiled here on the Versions LP.

And what that translates to is an album containing thirteen funky reggae covers of classic funk and soul cuts (some of the 45s contained instrumental – er – versions on the flip) that guarantees continuous floor-shaking action. Biggest in the set are arguably a brace of New Orleans funk covers – an Afrodyete-featuring take on Betty Harris’s There’s A Break in The Road and the Malik The Freq Moore-featuring cover of The Meters’ Cyril Neville vocal cut, Gossip which Meters guitarist and writer Leo Nocentelli described as ‘amazing.’ That said, however, the trio of Kendra Morris-featuring re-work of School Girl Crush by Average White Band, the Sy Smith-featuring take on Helene Smith’s You Got To Be A Man and The Dramatics’ Whatcha See Is Whatcha Get filtered through a reggae prism with the vocal talents of Alex De’Sert, Jesse Wagner and Malik Moore run them close. These cuts didn’t hang around on 7″, they won’t on LP either. Get on it!
(Out 25 March on F-Spot Records)

Posted on 26th February 2022 no comments