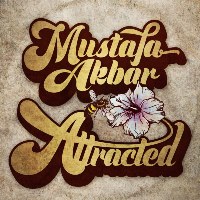 The Attracted EP consists of the last five studio recordings by Mustafa Akbar, lead vocalist for Fort Knox Five, Thunderball and Nappy Riddem as well as vocal collaborator with Basement Freaks (among others), until his untimely passing last year. That he left a huge gap behind goes without saying and this release only provides yet further evidence of the extent of the gap, showcasing Akbar’s versatility across its five-track length. The title track and opener offers lively, P-Funky grooves in praise of a certain lady’s curves while Resist opens in a haze of synth swells before settling into a staccato slice of chugging guitar-led funky criticism of Trump and Trumpist attitudes. Runnin’ Away flips the script with what the PR describes (with some justification) as ‘conscious R&B’ and is followed by the slo-mo funk of the social media-skewering The Likes. Finally Whatcha Gwan Do wraps things up with another P-Funky paean to the opposite sex. Assembled with love by the FK5 crew, complete with artwork designed by FK5’s Rob Myers based on an idea discussed with Akbar back in 2018, it provides a fitting epitaph for a man who is sorely missed.
(Out now on Fort Knox Recordings)