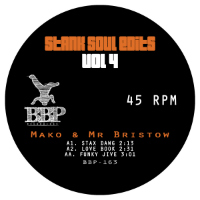 Stop the press! Mako & Mr Bristow finally release Stank Soul Edits Vol. 4! It seems like forever since Vol. 3 but now here they are with their fourth volume of funky 45 edits and three tracks no less, not to mention having jumped ship from Resense to Breakbeat Paradise for what just happens to be BBP’s first ever vinyl 7″! But three tracks on a 45? Well, like the boys say, their raison d’etre is making edits that sound like alternate funky studio takes from back in the day so too long an intro, outro or breakdown is a dead giveaway. And because some of the old soul cuts they use as source material barely get past the two minute mark, that means they were able, in this case, to squeeze the Craig Charles Funk & Soul Show-approved Stax Dawg and Love Book on one side. The former updates an old R&B cut from Motown’s biggest rival and gives it an Aretha/ Think vibe, while the latter re-imagines a southern slice of R&B as funky soul. And the third cut on the flip? Why, it’s first time on vinyl for an oldie off the pair’s 2015 EP Supersoul Rock N Roll – tried-n-tested dancefloor bomb Funky Jive which reconfigures a rock n roll classic as a New Orleans funk style banger. Mako & Mr Bristow then – they got more soul! Oh yeah – get your skates on – this is a limited 165-pressing run!
(Out 2 May on BBP)