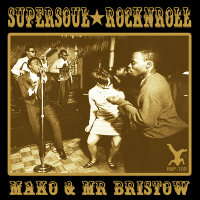 Bristol-to-London pairing Mako & Mr Bristow follow-up their own previous EPs on Breakbeat Paradise (Mako with The Hawk and Mr Bristow with Benny Silver) by dropping a brand, spanking, new 4-track EP of funk-soul-hip-hop-party breaks shortly – tracks off which have been getting much love from Craig Charles of late. They should probably get someone they know well to write the PR for that. Or perhaps one of them could do it – and the artwork too….

(PRESS RELEASE) Hey friend – do you need some supersoul? And maybe a touch of rock n roll? In fact, while you’re there – maybe you could use a dash of hip-hop too? Hell – maybe you could use all three at the same time?! But what does that sound like? How about two different versions of a rock n roll classic separated by two decades and different musical genres and now united into one so a new generation can Twist And Shout? How about Funky Jive where another rock n roll nugget gets made over into vintage chanking New Orleans funk? How about (and If Stax Ain’t A Reason to get this, I don’t know what is) a low n slow slice of Memphis soul transformed into a funk bomb? Finally, how about the bringing together of a too-early-departed, latter-day soul diva with a much-loved West Coast underground icon? This, my friend, is what it Supersoul Rock N Roll sounds like. Don’t sleep…

“…you keep offering us such excellent tunes that just make me impatient to get them on the show”
Simon Hodges prod. Craig Charles BBC Radio 6 Funk & Soul Show