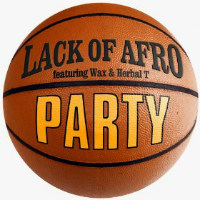 If your record is a slam dunk of an uptempo, b-boy breakin’ banger on which former Def Jam rapper Wax and his twin brother Herbal T bring their game and it’s going to get an ad synch with any company – it might as well be Adidas. Either that or Puma anyway. Here it’s the former, as slab of funk-based insanity PARTY (the hip-hop highlight of Lack Of Afro‘s 2011 LP This Time) is adopted by Footlocker and Adidas for the NBA Party ad featuring Fernando Torres. Premier League footballer in a basketball/ b-boy themed ad? Nope me either. Other than the money of course – twenty four second violation! Now released as a single and comes accompanied by the instro. There ain’t nothing like hip-hop music! Player and vid below.
(Out now on Freestyle Records)

Posted on 20th December 2013 no comments