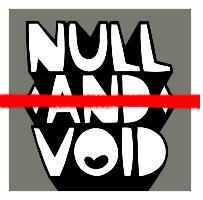 Clearly making up for the twelve year gap between 2007’s Romance Ain’t Dead and 2019’s excellent Have A Word, Kid Acne’s follow-up to the latter, Null & Void, is out already. And while many things should be null and void in today’s benighted world, this new long player certainly isn’t one of them, taking everything that worked brilliantly on its predecessor and doing it again with bells on. The foremost two of these things are use of  psychedelic beats from Chicago producer Spectacular Diagnostics that has served KA so well previously and the densely-layered lyrical pop culture references that have replaced the more narrative lyrics of the Romance Ain’t Dead-era. In addition to this, there are a number of quality mic guest spots again – this time all from UK talent – to wit: Jehst, Cappo, Vandal Savage, Taja and Jaz Kahina.

Null & Void‘s set is slightly shorter than that of Have A Word at twelve tracks instead of fourteen and kicks off with intro Welcome – a montage of retro vocal samples promising to unleash, “cosmic destruction…a strange new world rising from the old…[and]…an epic adventure,” as, “a man bursts his bonds to hunt for justice with his companions,” – cue a sampled voice saying ‘Spectacular Diagnostics’. I’ll leave you to guess precisely who the mysterious unnamed ‘man’ might be. The album proper begins with the mighty former single Flame Wars , as ceremonial horns and spaghetti western bells usher in lyrics about ‘pineal glands’ and the immortal line about a, ‘Fight Club in Matalan car park at midnight.’ Meanwhile Lo And Behold breathlessly name-checks (among other references) the Kardashians, Sumerians, ancient aliens, Equinox, Gogglebox, GOT‘s White Walkers and Wildlings in the space of four bars which might all sound a bit reminiscent of Beck’s Loser-style stream-of-consciousness musings (“Dog food stalls with the beefcake pantyhose,” anyone?) were it not for an occasional glimpse of something more lucid. And there it is – the observation that, “we all need a hobby; some sloppy with the rhymes/ others grip the mic properly.” Maybe there’s even a narrative after all – something about, “he’s being hunted by the Nazis…it led him to…” Hang on a minute – ‘Is he on about Indiana Jones?’ you ponder as you’re overwhelmed by a tidal wave of mentions of Annunaki, Airwolf, Rammellzee, the Eye of Thundera, Herbie Hancock, and Graham Hancock’s pseudo-science bollocks Fingerprints of the Gods. Verily, (like Hancock) this man is having a laugh, and you’ll laugh along whenever he allows something else lucid to emerge momentarily from the tsunami of allusive rhyme like an occasional face in a whirling ball of chaos matter.  Keep your ears peeled for Neon Fogou (the last single and the one with the weirdest central conceit), the darkly comic Unsubscribe (introduced by the disembodied voice of Stewart Lee) and LP highlight and centrepiece – another former single – the summery gorgeousness of Transistors.  Perhaps the whole thing is best summed up by KA himself though on Junk Data where dark social realism, northern slang, black humour and free association arguably reach critical mass: “Tip rats in your council flat/ bruv, don’t mind me though, the door’s on the latch/ I’m Bilbo Baggins in Bilbao/ Nah, I’m Baron Munchausen, I munch bao buns in the Bauhaus/ Rockin’ old school Berghaus/ That’s why you ain’t seen a peep or heard owt.”
(Out now on Lewis Recordings)

Posted on 2nd December 2021 no comments