KID ACNE: Have A Word LP 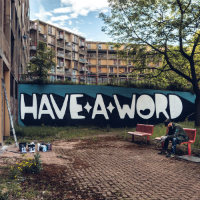 Incredible though it may seem, Have A Word is Kid Acne’s first solo long-player in the twelve years since the release of 2007’s Romance Ain’t Dead. Now, that is a lot of water under the bridge. Back then MB didn’t even have a .com address and that album came on like a tongue-in-cheek Yorkshire pastiche of the Beasties – not least of the reasons for which being Req One’s old school beats. In the intervening decade and more, K.A.s humour has been distilled and a lyrical style has emerged that is less narrative than of yore and more stream-of-consciousness. And if it maintains a similarity to the Beastie Boys in its endless pop culture referentiality (King Kull and Conan, Tolkien, D&D, The Phantom,Hitchiker’s Guide…, KFC, the Spice Girls…), the humour is delivered in an altogether more deadpan manner with, at times, the sort of bleak undercurrent to be found in the literary works of Yorkshire noir writers like Ben Myers, Ross Raisin and David Peace.

It’s style that became apparent in the 2016 and 2017 work which resurrected Acne’s 90s project Mongrels with DJ Benjamin Mongrels and U.S. underground emcee Sebash from New Kingdom. Here, the vibe was enhanced by gritty, lo-fi boom-bap beats which also characterise much of the music created for Have A Word by Chicago producer Spectacular Diagnostics. Former single Crest Of A Wave (which features New Kingdom’s other emcee Nosaj), is a case in point. Also, as with that recent Mongrels material, there’s a heavy seam of psychedelia running through both beats and lyrics here though it’s certainly not the wafty sixties California’ type. How else to explain the Neil Gaiman-esque notion of Unemployed Gods, references to Assyrian gods on Bubble Goose Empire, or the New Kingdom-featuring closer Ancient Sea Kings for example? Meanwhile there are enough FX, ambient samples and voicebox vocals across the duration of the LP to power an entire retro-sci-fi TV series. What you notice as the album plays through is that caught all over this stream-of-consciousness web of pop culture references are little nuggets of the more traditional emcee armoury of narrative, confessional, boast and put down – in the case of second single, You Get What You’re Given – all of these at once. Turns out our Kid the ‘heavy-hitter, verb spitter,’ has been, ‘under the weather’ but can still muster the mic chops to diss a,’young blood trending on Twitter with regrettable tatts and a bumfluff moustache,’ while mocking his own self-pity. One thing’s for certain, when it comes to that time, shortly, when people start to consider the best albums of the year – this will definitely be on the monkey’s list. More heavyweight than Romance Ain’t Dead but more accessible than Mongrels’ Attack The Monolith, there’s a properly maverick vibe to this encapuslated in Acne’s paraphrasing of a certain Groucho, “Won’t roll with a crew that’d have me as a member.” Also featuring guest appearances from Juice Aleem and Juga-Naut, Have A Word is well worth your time.
(Out now on Lex Records)

Posted on 12th November 2019 no comments