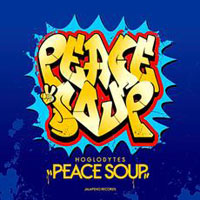 Meet Hoglodytes – and their Peace Soup EP – a mighty joining of hip-hop’s east and west coasts in the NY/ Woolacombe hook-up we’ve all been waiting for. Yep, you read that right – in lieu of getting both sides of the continental US to unite, the UK’s very own west coast scene has stepped into the breach. You can wipe that look of doubt off your face though. NY city is represented by the highly capable emcee Emskee of The Good People – who recently had a release out with Blunted Astronaut and is no stranger to working with UK beatmakers having previously done mic duties with Bristol’s Beekeepers. On beats are Woolacombe’s hip-hop scene and rural Devon’s finest – the equally capable and superbly named Chubb Nice and Vinyl Peasant – who deliver four uptempo nineties style bumps so you can throw your hoes down and get your hands up.
(Out 13 August on Jalapeno Records)