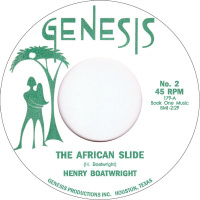 Henry Boatwright is the main man behind Soul Bros. Inc.. And Soul Bros. Inc. were the main shit back in the day. It’s as simple as that. Raw-ass funky soul from Texas in the late sixties and early seventies. Like these two cuts, The African Slide and the even more stank Git It – now re-pressed on 45. Originally these were released under Boatwright’s own name (though he was backed by Soul Bros. Inc.) and appearing under the S.B.I. name on the super dope The Story Of The Soul Bros. Inc. also released on Tramp five years ago and you’ll be hard-pressed to find a better funk 45 to spend your money on all year. Git It!
(Out now on Tramp Records)

Posted on 5th February 2015 no comments