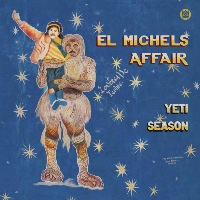 If you’re eager for more El Michels Affair following last year’s atmospheric 70s Euro cinema soundtrack album, Adult Themes, your wait is nearly over, for new LP, Yeti Season will be upon us in late March. Big Crown are currently previewing two more tracks, Sha Na Na and Murkit Gem, following the two which appeared as 2018 single Unathi b/w Zaharilla. And if you dug that single, expect more of the same, which is to say Eastern psych-funk – with Murkit Gem (digital single, out now), like Unathi and Zaharilla featuring the Hindi vocals of 79.5 singer Piya Malik. Sha Na Na meanwhile features the pipes of none other than label mate Shannon Wise of The Shacks. Check back in with the monkey soon for a full write-up on the LP.