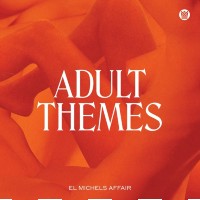 Following 2017’s excellent Return To The 37th Chamber and its set of Wu-Tang instrumental covers, El Michels Affair’s new LP, Adult Themes returns to the idea of all-original content.  With a name like that, a cover featuring intertwined naked limbs and EMA’s debt to library music of the sixties and seventies, you might be expecting some sort of pastiche of 70s porn flick OSTs. And there is certainly something to that as long as you understand we’re not talking bow-chicka-wow-‘has anyone seen my wrench’ type material but rather what Serge Gainsbourg and Armando Trovaioli might have knocked out (thank you, I’m here all week) for Madame Claude and Sesso Matto respectively. Having said that, the band themselves would probably be just as likely to reference David Axelrod, Francois De Roubaix and even Moondog.

As it turns out, the LP was born out of Leon Michels’ decision around 2017 to create, effectively, some of his own library music in the form of short, minute-long interludes for hip-hop producers to sample.  In the event, the band ended up with a twelve-track set of longer cuts.  Opener and previous single Enfant is a Gainsbourg-esque number featuring breathy female oohhs, aahs and da-da-daas throughout courtesy of Shannon Wise of The Shacks with the beatless Adult Theme No. 1 reprising Wise by way of an outro.  The third single to be lifted from the album, Life of Pablo,  starts with a newborn baby’s cry and meanders to an eventual crescendo while first single Rubix is the sort of thing nineties trip-hoppers sampled and programmed to create – all moody cinematic instrumental sweeps and bleeps over a boom-bap beat.  Elsewhere, Kill The Lights is a sleepy number that evokes moody 70s Euro cinema OSTs and could have been lifted from any number of crime or porn flicks – although that description also applies to Munecas, Hipps and indeed pretty much every track contained hereon.  In short, an LP perfect for both home listening and its more library music-oriented original purpose.
(Out 5 June on vinyl/ Out now (digital) on Big Crown Records/ )