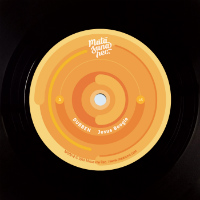 How do Matasuna Records do it? The time between vinyl 7″ releases shrinks again yet they put out their best release so far – why it’s against all natural law! Not that anyone will be complaining about this brace of Latin bangers from serial editors and former Resense and GAMM suspects Dubben, you understand. A-side Jesus Boogie is a re-version of a seventies Brazilian number squarely aimed at the dancefloor and would have been enough on its own to garner accolades. And as we learn from The Big Lebowski – you don’t ‘fuck with the Jesus.’ Yet Dubben have indeed fucked ‘with the Jesus’ and trumped it with a B-side re-working of Cachaça, a Polish 60s bossa-influenced cut that Quincy Jones could have penned. They polish it a little here, chop it a little there, add a percussive boost and – yes – why not – a bit of Man With Harmonica from the Once Upon A Time In The West OST dropped in on the bridge. It shouldn’t work but it does. Peak time party banger ahoy!
(Out 22 February on Matasuna Records)

Posted on 20th February 2019 no comments