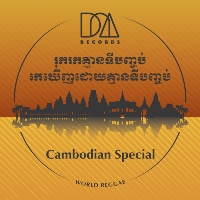 Following the release of Puman’s Bulang Beauty single in March, DJ DSK’s DNA Records is back with another two slices of South-East Asian reggae on either side of the label’s latest vinyl 7″ ‘Cambodian Reggae Special’ featuring two international crews. Forged in the sweaty heat of Cambodian capital Phnom Penh in 2011, Dub Addiction boast Cambodian, French, German and Nigerian members and their track Cambodia combines an energetic (for reggae, anyway) beat with traditional Cambodian instruments along with vocals from both Cambodians and international singers and toasters. Surely, there can’t be another such crew? Enter Vibratone who also formed in Phnom Penh a mere year later and whose personnel include members from Cambodia, Brazil, France and the Philippines who all come together to create the rootsy bounce that is Phnom Penh Reggae. You couldn’t make it up! Well, you could actually – not to mention record it and release it on wax too. As long as you’re based in Phnom Penh, obviously.
(Out now on DNA Records)