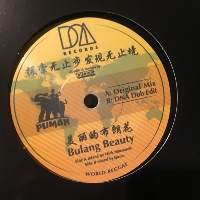 Make the mistake of Googling ‘Puman’ and first up is urbandictionary.com’s full list of increasingly bizarre definitions. What doesn’t appear on the list however is ‘Outfit fusing music of Jamaican origin with the sounds of Yunnan province in China.’ Mind you, who’d think of that? Well, Puman as it turns out, who took a traditional ethnic song sung by a Yunnan elder and his choir of students and layered it over the top of a booming reggae riddim. Enter DJ DSK, veteran of two decades’ living in China who only hooks the band up with UK reggae producer Manasseh and the result is this 45 – Bulang Beauty. Of course, it would be rude not to drop a dub version on the flip and DSK does the decent thing.
(Out now on DNA Records)