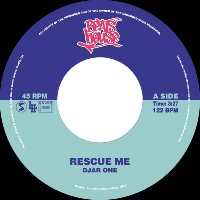 45 soul edit/ re-works are bigger than ever right now and a man who always knows what’s good on that front is Le Havre’s Djar One who comes through with two biggies right here. First up is a Fontella Bass’s Rescue Me – an evergreen a peak-time party bump and now fully rebooted with a funky drum underpinning to give it that extra boost. On the flipside is another edit of Wendy Rene’s Bar-B-Q following at least two previous digital ones by Monetrik in 2012 (sped things up and tweaked the drum pattern) and Retro The Robot in 2016 (maintained the original’s tempo in 2016 and beat pattern but looped sections inna hip-hop stylee). As with the latter, Djar One more or less sticks to the original tempo and drum pattern but imagines the drums were a little chunkier and extends the track to make it the longest of the three by a whisker. Comes in pink or black vinyl (100 copies of the first, 200 of the second) and will never be re-pressed. Get on it!
(Out now on Beats House Records)