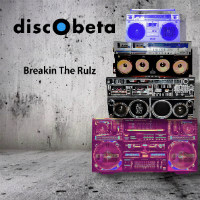 Breakin’ The Rulz (and I’m not just talking about spelling conventions), it’s Discobeta! Not for them sending promo out before release! Here is a duo that rock out with their cocks out and play dangerous – this dropped on 19 November after all. But never mind all that, what you need to know is that all the beats on this seven-tracker are originally composed and played and that (along with a Badboe remix and instros) it delivers a mixture of the old and the new. The former is represented by Yoobie Doo of which there are no fewer than four versions – the original, the Badboe remix, the instro and the Badboe remix instro. This bad boy features a De La Soul vocal and, in the original version, provides a typically rumbling slab of Discobeta hip-hop. The remix, on the other hand, finds Badboe flipping the beat into something that might have graced a Digital Underground track circa 1990. The old, meanwhile, is represented by Dope Noize a – well – another typically rumbling slab of Discobeta hip-hop – the monkey’s favourite ever DoB cut in fact (not to mention one of the monkey’s favourite ever hip-hop booties) – graced with a Chill Robb G ‘pella and comes in original and Ol’ Skool Flava versions. All of which craziness just leaves DJ Tool Banana Cream Pie (which rocks it like it’s 1985 in Jam Master Jay’s crib in Hollis) to make up the balance of cuts.  Hurrah!
(Out now on Left Hand Lucy Recordings)

Posted on 16th December 2019 no comments