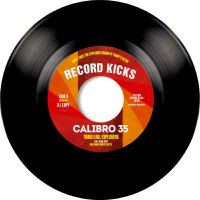 The new single from Calibro 35, Travelers, Explorer, finds the retro library music-inspired Italian outfit travel along and explore the path that is – well – less travelled – at least as far as they’re concerned anyway. Why? Because they employ the positively ethereal tones of Eliza Zoot to grace this previously unreleased vocal version of the album closer on their recent Decade LP. What was once something that negotiated a twisting pathway between twangy Morricone-esque stylings and epic strings-filled psychedelia now favourably bears comparison with the likes of classic 90s trip-hop with a cinematic bent. Talking of cinematic – check out the vid. below.
(Out 12 October on Record Kicks)

Posted on 9th October 2018 no comments