THE BONGOLIAN: I’m A Bigger Badder Bro Than Any Game Of Thrones (2017) 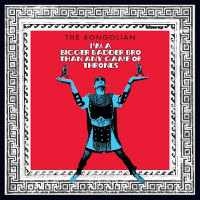 Where to start with The Bongolian’s new single I’m A Bigger Badder Bro Than Any Game Of Thrones then? The Targaryen-level craziness of the title, that seems to invoke a drunken fratboy challenge to George RR Martin, maybe? The Delia Derbyshire-on-milk-of-the-poppy Moog antics that characterise most of the track? The fact that the whole thing waltzes along a psychedelic knife edge on one side of which lies prog-rock and on the other glam-rock yet by some Varys-like subtlety manages to avoid descending into either? Well, you can start wherever you like really, as this is an anything goes kind of affair drawn from the Moog Maximus sessions (though it doesn’t appear on the album) – and if I’m any judge of PR, released to draw attention to the vinyl release of said album very shortly.
(Out 3 November on Blow Up Records)

Posted on 4th November 2017 no comments