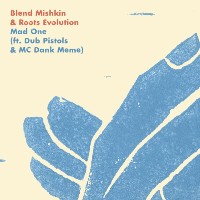 So the third single from Blend Mishkin & Roots Evolution’s forthcoming Unity Of Opposites album is Mad One featuring Dub Pistols and MC Dank Meme. Now while the words ‘mad one’ might conjure early 90s Manchester and pilled-up types in super baggy pastel-coloured clothing, rest assured that this is resolutely dubby reggae drenched in brass with Eastern Mediterranean influences once again like its two predecessors. Dub Pistols’ Barry Ashworth is on the mic with the Brixton blues and walking a mile in another man’s shoes (he ain’t gonna get them back!) while MC Dank Meme’s chanting is so bassy he almost comes on like a Jamaican digeridoo. In a good way.
(Out now on Rewind Guaranteed / Boom Selectah Records)