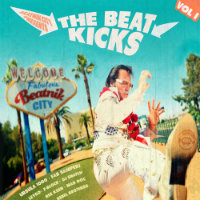 Can the beat kick? The answer, judging by the contents of the Beatnik City label’s latest – The Beat Kicks Vol. 1, would seem to be an emphatic, ‘yes it can!’ This follow-up to The Rio District Vol. 1 switches the focus from party breaks edits of sixties Brazilian grooves to party breaks edits of any 50s or 60s gear that hasn’t been nailed firmly down. Expect to hear Jacques Dutronc, Little Richard, Sonny & Cher and Thurston Harris getting the big beat treatment from Ursula 1000, Leygo, Fab Samperi and F-Block; Sugar Pie Desanto get the DJ Snatch edit treatment and Mad Doc closing with a piano-funk burner. Keep your ears peeled in particular though for Ree Keen who ventures where 3 Amigos (with The Kingsmen’s version) and Mako & The Hawk (with Paul Revere & The Raiders and The Kingsmens’ versions) once trod with another big beat take on yet another cover of Louie Louie and The Rebel Brothers who deliver a super sweet and subtle edit of Betty Everett’s Hound Dog. Beatnik city, brother!
(Out 1 April on Beatnik City)