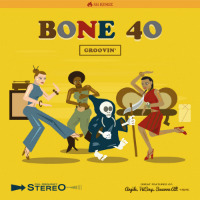 Is it time for a bit of downtempo breaks? I think it is – it’s been a while – so here’s Dutch producer Bone 40 with his six-track Groovin’ EP on which he aims to combine the live jazzy and soul vibes of everyone from Booker T, Herbie Hancock and Miles Davis on the one hand with Madlib and Dangermouse on the other. And it’s fair to say he’s managed on that score very capably.

Highlights include the title track which opens with the sweeping atmospheric sounds of wind and sea over the Marlena Shaw/ California Soul drum break soon joined by an uplifting piano for most of the rest of the way with some Miles-ish trumpets and Abercrombie-esque guitar for jollies in the middle. Fee Fi Fo Fum is the bona fide hip-hop track with New Jersey emcee HiCoup holding forth over a crisp break leavened by some jazzy piano tinkling and delivering a sung hook. There’s also instro Cellar Skum which is at the more Madlib end of the beats rainbow turning, as it does, on crashing percussion and frantic Rhodes keys and let’s not forget the classic female-vocal led 90s trip-hoppy business of Angele De Jong vehicle Scared. Expect a couple of interludes and instro versions of the vocal cuts and – as you can see – some nicely evocative cover art too.
(Out now on Fuel Box Music HERE)