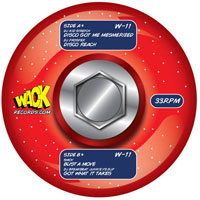 It’s been a while but ‘Berry Geordie’ (a.k.a. producer Smoove of Smoove & Turrell) has a new Wack Records drop waiting in the wings – and this one comes with a theme. Do you hanker for that era when funk and soul was either busy morphing into or being superseded by four-to-the-floor beats and hip-hop was barely a twinkle in Kool Herc’s eye? Are you all about ‘leisure suit’/ nylon shirt-open-to-the-waist combos? Maybe the nu-funk/ ghetto funk axis is a bit edgy for you but you still can’t bring yourself to listen to house music? If so – here’s four huge disco biscuits for you as ‘Smov’ and fellow glitterball hustlers Kid Stretch, Prosper, The Breakbeat Junkie and DJP get their electric slide on. If Smoove keeps this up we’ll have to call him Smancuso. PR below player.

(PRESS RELEASE)
Wack Records Return after a short holiday in Scarborough. This time fully equipped with Giant Disco balls, 70’s roller boots and flame throwers in order to get the party started right!

DJ Kid Stretch hails from Greece (DMC Greek Champion 2000) and his production skills shine in this superb Mash Up / Remix of Disco Got Me Mesmerized. French veteran DJ Prosper turns the heat up with his version of ‘Disco Reach’ blending Motown and Electronica with Rose Royce. SMOV takes Buster Rhymes vocal and flips it over a melody of pure Disco classics dropped into a vat of tuff beats that result in ‘Busta Move’. The Breakbeat Junkie’s collaboration with DJ P from Stoke U.K resulted in this powerful ball breaker of a tune that will leave you in a slump exhausted from ‘Got What It Takes.’

Posted on 11th September 2011 no comments