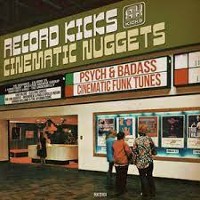 If you were to speculate which contemporary funk and soul label would be capable of putting out the most impressive LP collection showcasing their roster’s chops when it comes to cinematic soul, surely Milan’s Record Kicks would be one of the first to spring to mind. Not that there’s any need to speculate now, since the label has just released new compilation LP Record Kicks Cinematic Nuggets, subtitled Psych & Badass Cinematic Funk Tunes.  That subtitle is no idle boast either since the eleven contributions on this include cuts from the likes of veteran cinematic soul crew Calibro 35, giallo/ spaghetti western OST re-creators Whatitdo Archive Group and recent Russian signings The Diasonics.  In terms of variety, you get everything from blaxploitation-esque funk in the form of Third Coast Kings’ Errol Flynns – the closer from 2014 LP West Grand Boulevard – scorching organ-led pyrotechnics on Link Quartet’s slow building monster After And Once Again and late sixties/ early seventies library music vibes from such tracks as The Diasonics opener Kayana and Moonbrew & Paolo Apollo Negri’s Project Gemini. Best cuts however are the aforementioned Calibro 35’s ominous slice of crime-funk Tom Down, a solo piece of Turkish psych, Altin Maske from Whatitdo Archive Group’s Alexander Korostinsky and the b-boy friendly rhythms of Trio Valore’s thunderous El Compadre.
(Out now on Record Kicks)

Posted on 20th December 2022 no comments