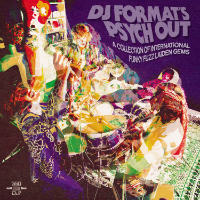 Like guitar fuzz? Like heavy breaks and bass? Yeah? You must like the same kind of ’60s and early 70s psych rock fuzz as DJ Format – you know – the sort of thing that yields samples like the dope one he used on the Angry Birds track he did with Phill Most Chill the other year. The only problem is he can’t get away with playing it out that often apparently. No? Sad Face! Why not? Turns out it’s a bit ‘heavy’ for people in the main. Pussies. Does that mean ‘move along nothing to listen to hear’ then? It certainly does not. Hell no – because the now legendary producer, deejay and crate-digger has put together a collection of fourteen of the finest slabs of psych-rock fuzz in his collection.

And you should be grateful – firstly because Format’s dug around in the vaults of places like Discogs and Record Kingz (and who knows how many other virtual and physical repositories of dusty old obscure vinyl) so you don’t have to and secondly because what he’s uncovered is blinding stuff. It’s like those bits of the sixties and that people who were there can’t remember because they were utterly baked – but in musical form! In fact, some of the cuts on this are so trippy in fact, you might start remembering the sixties even if you weren’t there. Expect a paisley wig-out version of Israeli folk song Hava Nagila by The Quests, Kung-Fu Fighting‘s older, cooler, more laid-back Japanese cousin Karate Chop by The Tijuana Brats, 49th Blue Streak’s super fuzzy version of Foxy Lady, a lazy, hazy acid-drenched love-in version of Louie Louie from Friar Tuck And His Psychedelic Guitar (which pretty much says it all, frankly) and a balance of glorious obscurities dug up from god knows where. Breaks galore, samples galore. Headz get on it!
(Out 10 June on BBE)