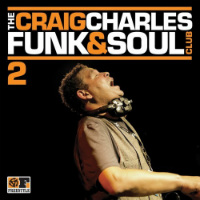 Has it been a year already since Freestyle Records dropped the first Craig Charles Funk & Soul Club comp? Actually, it’s been slightly more than a year though the arrival of number 2 suggests a CC’s Funk & Soul Club release is all set to become an annual recorded music event as well as a good night out for all the family. Did I say all the family? I just meant those who dig the funk, are over eighteen and not likely ask, “Daddy why is the Coronation Street taxi driver man lighting up a really fat cigarette on stage?” In any case, an annual CC compilation should be regarded as a good thing, not least of the reasons for which is that that this one is even better than its predecessor.

The oldest track on here is The James Taylor Quartet’s fiery hammond cover of Herbie Hancock’s Blow Up but unlike with Volume 1 (which featured Al Wilson’s The Snake) the oldest track (while good) is far from the best on here. Highlights include Smoove working some percussive magic on Aldo Vanucci’s excellent Kylie Auldist collab, You’re All Show, Dutch crew Euro Cinema and their blues-y hammond funk stomper Koekwaus, Oz soul crew Saskwatch’s bluesy soul scorcher Second Best, a gnarly bit of mod-psych-funk from hammond/ bongo bad boy The Bongolian, Australia’s finest dirty funk export Deep Street Soul and an exclusive northern soul style mix by Bristol’s laziest production duo Mako & The Hawk of a sweet unreleased track by Parisian chanteuse Emma Beatson with Hawk’s band The Hawkmen. Not bad. There are also exclusives from no less than Dr Rubberfunk and Lack Of Afro. However, what this one is really all about is the absolutely giant Lack Of Afro (again) 2012 remix of Hidden Jazz Quartet’s High Heels feat. Omar which rightly takes centre place on the LP’s tracklisting, was MB’s track of the year last year and regularly still brings down the house when I play it. I believe the correct phrase is “Awooga”…Players below.
(Out 25 November on Freestyle Records)

Posted on 20th November 2013 no comments