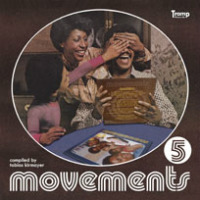 …And it’s another effortless five star compilation from Tramp Records – the label that’s spent ten years keeping the funk flame of the sixties and seventies burning. In fact, not just ‘keeping burning’ but also lighting new ones – and I’m not talking here about contemporary funk, I’m talking about rarely seen and little heard of privately pressed funk-soul cuts of yore – some of which have had their first proper release decades later via Tramp’s owner/ digger extraordinaire, Tobias Kirmayer. And in case you were thinking that maybe the privately pressed funk-soul from back in the day didn’t somehow make the grade – think again sucker. It’s every bit as good as the better known classics and this seventeen track comp. is packed full of of good shit to give funk fiends their fix – plus a little side order of soul jazz in the third quarter just for jollies.

It’s clear what you’re in for during the first half of the LP the minute the fat break and chicken scratch guitar of Bobby Allen & The Exceptions’ Soul Chicken kicks in. Two other highlights of this section include a very early (and super pricey if you can find it) 45 single from Lee Fields – Funky Screw and the standout track on Tramp’s recent Jimmy ‘Preacher’ Ellis compilation – Put It On Your Mind. The soul jazz interlude features Jimmy Rowle’s frankly barking shuffle Behind The Face and Nannie Porres’ jazz club version of Ain’t Necessarily So – Jimmy Somerville eat your heart out. There’s no slacking in the last quarter of the album either with two monster slices of heavy funk from Wildfire and Theodis Ealey, Sunrize’s sax-led groover Ease It On In and Alley Pat’s Pat’s Rubber Band – “You’ve heard about Bootsy’s Rubber Band and you’ve also heard about the Rubber Band Man. Now looky here – run and tell your mammy about Pat’s Rubber Band.” Sound advice – shouldn’t you be going to tell her?
(Out 22 April on Tramp Records)