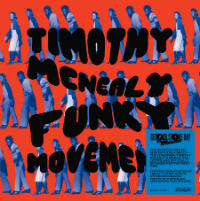 While talk of seven inches and Dallas may bring to mind a certain ubiquitous bongo film, pre-1978, you could be regularly assured of a different kind of seven inches in ‘D-Town’ courtesy of Texas funk king Timothy McNealy. Why? Because back in the day, McNealy was busy throwing down soul and funk 45s on his Shawn imprint. But neither back in the day, nor since (despite various 7″ reissues since the turn of the millenium) has any of McNealy’s output been collected together in album form – until now of course, with the arrival of this Funky Movement compilation.

Named after two of McNealy’s most famous cuts – the uptempo dancefloor groove of the JBs-ish Funky Movement #1 and the more relaxed Rhodes and bongo-inflected Funky Movement #2 – Funky Movement gathers both these two cuts and a further eight McNealy classics. These include the sleepy Mr Loverman-style grooves of opener Will you Be There and What Would You Do?, the louche psychedelia of Sagittarius Black, and the appropriately named soul jazzy instro Easy Easy Easy. Also present are a cut entitled Do It – which finds McNealey alternately crooning over soulful sax-backed sections featuring minimal drumming interspersed with a low funky groove and a cover of Marvin Gaye’s What’s Going On. Pick of the bunch however (along with the aforementioned Funky Movement #1) are the gospel-tinged funky paean to a lover, So Glad You’re Mine, and the heavy wah-wah and harmonica-fuelled barnyard funk instro of KC Stomp. Another Now-Again sureshot then.
(Out now on Now-Again Records)

Posted on 24th December 2017 no comments