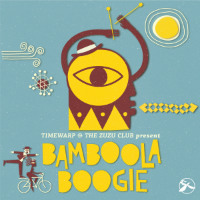 As coverage of musical genres goes, that of Greek blog The Zuzu Club is what you might call a broad. I would say catholic but that hardly seems appropriate for something based in Greece whereas orthodox somehow doesn’t seem to cover afro, jazz, swing, funk, latin, electro, house, nu-funk, nu-jazz, lounge, dub, rock, indie, pop and blues – all of which are apparently in said blog’s remit. And broad indeed is the sweep of tracks appearing on Bamboola Boogie the first compilation from The Zuzu Club in collaboration with Athens-based label Timewarp Music and its boss, Timewarp, himself. Handily – many of the artists on the comp. seem to be Timewarp signings – what are the chances?

The first section of the comp. is a dubby set in which Blend Mishkin & Roots Evolution’s Dawn Penn-referencing Baby Got Me Good stands out followed by a number of breaks cuts beginning with the atmospheric uptempo trip-hop of The Worldstylers’ excellent Rabbi’s Groove and featuring Grain Zero’s rather good big beat number True to You. Thereafter it’s a trip to the dark side time with a number of house cuts followed by some electro blues of the house-beat augmented variety before Funky Destination and The Bas Lexter Ensample close proceedings with a brace of energetic breakbeat tracks – the former with the bluesy Another Porn Song and the latter with the synth-soul informed Pretty Girls. Should be something on there for most people to boogie to.
(Out now on Timewarp Music)