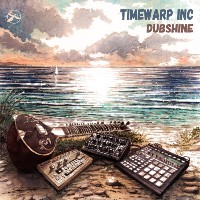 Hands up who needs a bit more dubshine in their life! What’s ‘Dubshine’ you ask? Well, I supposed you could ask Timewarp Inc. – and if you did, I reckon he’d say something like it’s a highly uplifting, mid-tempo instrumental skank. Which is probably just as well since his next release – due out next week – is, well, a highly uplifting, mid-tempo instrumental skank with a WonderfulWorld, Beautiful People-ish melody. Sounds summery, doesn’t it? And rather than being misplaced given the time of year, I’d say this was a perfectly-timed musical mood-raiser given the sinking temperatures and rapidly darkening evenings – especially if you live in the northerly latitudes. So bent is Timewarp Inc. on giving you a good time in fact, he even supplies the track in ‘Kickit’ and ‘Beatit’ versions – differentiated by a four-to-the-floor beat on the first and a breakbeat on the second, though that sitar is there on both. Take your pick, and get niced up.
(Out 26 November on Timewarp Music)