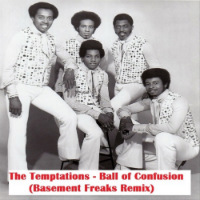 Anyone familiar with The Temptations’ funky psych-soul single Ball Of Confusion from 1970 will know two things about it. Firstly, that it provides a lyrical commentary on a society in turmoil and secondly, it is such an epic track it would take balls of steel to remix. What manner of remixer would dare? Well, it seems that someone who doesn’t baulk at such a challenge is a certain George Fotiadis – a.k.a Basement Freaks – who doesn’t so much grasp the nettle as positively roll around naked in a ditch full of them, emerging victorious with this remix. It’s difficult to imagine anything funkier than the original so he goes in the other direction juxtaposing deeply jazzy and mellow Rhodes-drenched instrumentation with the hard-hitting lyrics. Cop it below.