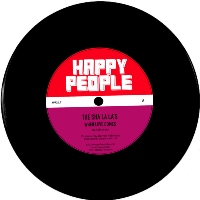 It’s double northern soul business from The Sha La Las on this forthcoming double-A side vinyl 45 from Happy People Records – When Love Comes b/w Sorrow. The guitar-led former track (from the band’s last LP, Soul Of The Nation) was originally released on 7″ via Detour Records a couple of years ago, promptly selling out and becoming unavailable until very shortly. Sorrow, meanwhile, delivers a xylophone topline and is lifted from the band’s 2017 LP ‘(Gotta Find) A Better Way’ and gets its first time on 45 with this release. Vid. and players below.
(Out 10 July on Happy People Records)