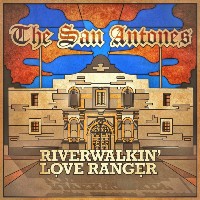 Never underestimate the love of non-Jamaicans with big tattoos for retro-reggae – The San Antones for example whose new LP, Riverwalkin’ Love Ranger is just out. Indeed, it might almost have been called ‘Rivas’-walkin’ Love Ranger, given the omnipresent organ-playing of Roger Rivas (who also produced the album) from L.A.’s dirty-reggae kings The Aggrolites. And while the San Antones may have dabbled in various reggae styles in the past, it’s early seventies reggae that is very much a touchstone on this LP – albeit with their signature San Antones Texas geetar twang.  Not that guitar twang was absent from that period in Jamaican music of course – just ask Ernest Ranglin, whose work this recalls at times.

Like their debut long player The Walking Texas Danger, Riverwalkin’ Love Ranger consists half of original tracks and half of dub versions of said originals – though in this album’s case, they’ve managed one more original (and thus one more dub) topping out at twelve cuts. Passin’ Lampasas establishes the feelgood vibe with a steady guitar-led skank on which that classic organ-sound appears in a solo around halfway through. There’s nothing thorny about No Saguaro either which keeps things ticking away at an even more laid back tempo.  Stone Oak Fling keep things mellow, opening with a woozy guitar noodle before the monkey’s favourite cut – Luckenbach – gets on a funkay reggay tip.  The final two cuts are a brace of Jackie Mittoo-ish grooves – Sweetwater and Organ At Night and then it’s all about the dub versions.
(Out now on Sonority Music Group)