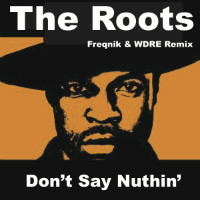 …In which NY hip-hop producers and remixers Freqnik & WDRE take the rather good minimal tech-funk-hip-hop of The Roots’ original Don’t Say Nuthin from 2004’s Tipping Point LP and transform it into the rather good organic-funk-based hip-hop of their ‘Crime Funk’ remix. In truth though – the only felony connected with this track will be your failure to download. Cop it off the player below. And don’t forget to say something about Don’t Say Nuthin in the comments. They’ve also got a rather good Latin b-boy breaks single out at the minute called Favela B-Boy Funk more on that HERE.

Posted on 28th November 2012 no comments