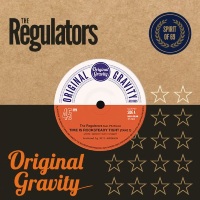 The country might have been at a virtual standstill for the last couple of months but that hasn’t stopped Original Gravity Records pushing ahead with the goodness in the form of 200-copy run of a new Regulators 45 Time Is Rocksteady Tight (Take 2) b/w Rocksteady Lockdown. Well – it’s not like time is tight, is it? As the track name implies, what you’ve got is a cover version of the much-covered Booker T & The MGs instro. at rocksteady tempo (though still fast for rocksteady) by The Regulators a.k.a OG Records’ head honcho, Neil Anderson with a little help from his friends. On the other side is the slower but arguably even better organ-led instro., Rocksteady Lockdown and, as ever, the whole release has been done the way they used to play! It’s what OG do. As if that’s not enough, there is also another 45 of a fifty-press run of what is presumably ‘Take 1’ of Time Is Rocksteady Tight with a ska version – Time Is Ska Tight (see what they did there?) on the flip from Prince Alphonso & The Fever (a.k.a Mr Anderson again). Time is much tighter on this second one though since, at the time of writing, there were only five copies left to pre-order. Get in on the action for both releases HERE.
(Pre-order now/ Shipping July/ August on Original Gravity Records)