THE NEW MASTERSOUNDS: Be Yourself (Vinyl LP + 45) Re-release 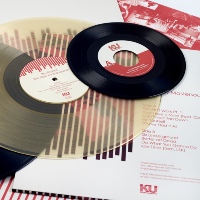 Maybe a funk revival twenty years after funk first became displaced or absorbed by disco and early hip-hop was on the cards but who would have predicted that a further two decades on (having lasted twice the length of funk’s original heyday) it would still be going strong? Maybe The New Mastersounds know something about it having appeared in 1999 just a few years after the formation of Sharon Jones & The Dapkings and adding momentum to a movement arguably begun by Germany’s Poets Of Rhythm. And maybe, now with the burgeoning vinyl and (especially 45) revival is as good a time as any for their second LP – Be Yourself – to get a first time on vinyl release along with a bonus 45.

Enter, label KingUnderground to do the necessary. As a standard vinyl LP release, the full fourteen tracks from the original CD drop wouldn’t fit on a single vinyl LP so Barça, Coming Down, R.T.A, This Ain’t Work Part 2 and Coming Up Roses don’t make it onto the tracklist. This is where the bonus 45 comes in by featuring all of the above except Blue Note-y jazzy speed noodle Coming Up Roses. The remaining nine tracks include most of the original set’s line-up of the sort Meters pastiches for which NMS are rightly famed – particularly the guitar vs organ lope of You’ve Had It All. The balance of the LP content consists of a trio of jazzier numbers (Idle Time feat. rapper LSK, soulful Corinne Bailey Rae vehicle Your Love Is Mine and the uptempo title cut) along with the band’s cover of Sneaker Pimps’ trip-hop classic Six Underground and Do You Want To Do on which the band combine their love for both New Orleans-derived funk sounds and late 60s/ early 70s Blue Note stylings. Seventeen years old it might be but this is a set that still sounds fresh.
(Out 24 April on King Underground)