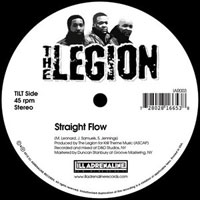 The who? What do you mean you’ve never heard of Black Sheep-affiliated South Bronx boom-bap crew The Legion? Yeah alright – they weren’t exactly high profile back in the day but as banger Straight Flow (originally recorded in 1995 underlines – that probably wasn’t The Legion’s fault. Probably? Of course it fucking wasn’t – it was all about the label foundering on the rocky shores of the music business. Now on seven inch with a new video, Straight Flow demonstrates what is frequently the best way to listen to jazz – sampled, with a fat beat and the straightest of flows over the top. Very DITC/ Freestyle Professors – look out for The Legion’s The Lost Tapes EP later in the year.
(Out now on Ill Adrenaline)