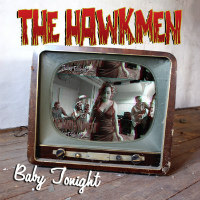 After going viral and amassing a stupid amount of views on Youtube, The Hawkmen’s Baby Tonight finally gets a single release – albeit a digital one – that includes both studio and live versions. If you caught the band’s self-titled hotrod n soul album (multiple tracks of which have received Craig Charles rotation) you’ll definitely have noticed Baby Tonight around halfway through the set because it’s one of the highlights. Unlike their sixties RnB and northern soul tunes it harks back to the origins of RnB and even nods to the tunes like Fat’s Domino’s Be My Guest Tonight (which kick-started Jamaican ska) in its use of off-the-beat piano. Check that live Bopflix video session below!
(Out now on Greystone Records)

Posted on 3rd September 2019 no comments