THE EXCITEMENTS: Sometimes Too Much Ain’t Enough (2013) 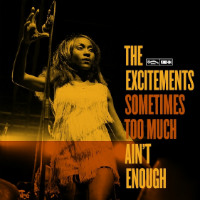 The 2011 release of The Excitements‘ self-titled debut LP was pretty much the retro-soul equivalent of a new gang rocking up in town and telling the competition, “Get lost. We run shit here now.” And they weren’t fronting. The album delivered twelve stank covers of early-to-mid-sixties rnb, recorded analogue style and played tightly enough to have Daptone looking nervous. The jewel in the band’s crown however was singer Koko Jean Davis, who (I put it to you) is the most convincing soul queen throwback in the history of retro-soul – black, American accent, voice with gospel power and a neat line in early vocal and sartorial Turner-isms. Don’t argue. ‘All very well’, you might say, ‘but can they manage to write their own shit and still cut it?’

Let’s put it this way – it has long been de rigeur in PR circles to claim of any band’s release within sniffing distance of sounding vaguely retro-soulful that said release could be a ‘lost classic from [insert name of classic soul label here].’ The descent of such claims into cliche will leave you woefully underprepared however, for the fact that Sometimes Too Much Ain’t Enough really does sound like a slept-on classic from the Stax or Sue Records vaults with twelve tracks of maximum rnb that you’d have a job picking out of a lineup of genuine sixties articles.

Ha Ha Ha is the obvious single with its distinctive opening motif of a Turner/ Collins-style message to needy men (“You know some men think us women are like machines…,”) and is in fact the album’s first single (see vid below) though the band is far from short of choices for the next one. Keep It To Yourself opens the LP at full throttle and things only slow down briefly for soul lament I’ve Bet And I’ve Lost Again which sandwiches tale of a mistress Don’t You Dare Tell Her between itself and full-on instro The Hammer. If anything, the final five tracks then go at it even harder than the first seven. This latter half of the album finds time for a song named (in true sixties fashion) after a ridiculous dance (Fishing Pole) , a bit of solo surf guitar in I Believe You and a stomping final cut. Real soul fans – consider yourself duly notified. Ha Ha Ha video below – full album audio, soon come.
(Out 30 September on Penniman Records)

Posted on 19th September 2013 no comments